Tell Spring Not To Come This Year
Press Area

Tell Spring Not To Come This Year 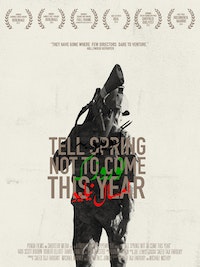 Tell Spring Not to Come This Year follows one unit of the Afghan National Army (ANA) over the course of their first year of fighting in Helmand without NATO support to finally tell the story of the war from their perspective. The only feature documentary filmed entirely embedded with the ANA, it is an intimate and humanist film, told from a largely unheard and misrepresented perspective, that gives viewers a unique perspective on the legacy of NATO’s war, and the future of the country. Without a foreign soldier in sight, and no narrative but their own, this is the war in Afghanistan, through the eyes of the Afghans who live it.