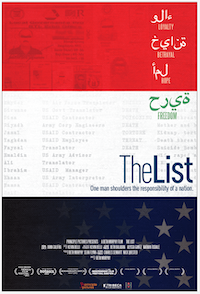 THE LIST tells the story of Kirk Johnson, a modern-day Oskar Schindler who is fighting to save Iraqis whose lives are in danger because they worked for the U.S. government and military to help rebuild Iraq. After leading reconstruction teams in Baghdad and Fallujah for the United States, Kirk discovers that many of his Iraqi friends and colleagues are being targeted as 'collaborators with the enemy.' Perceived as traitors, their fates are sealed, and they are systematically hunted?killed, kidnapped, and forced into lives on the run. Frustrated by a stagnating government bureaucracy in the U.S. that fails to protect U.S.-affiliated Iraqis, Kirk begins compiling a list of their names and works with a team of lawyers to get them out of harm's way. Bound by a sense of moral responsibility and honor, Kirk sets out to redeem a nation that has largely betrayed its Iraqi allies.