Doin' it in the Park
Press Area

Doin' it in the Park 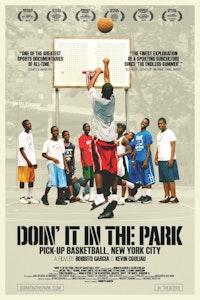 In New York City, pick-up basketball is not just a sport. It is a way of life. There are 700+ outdoor courts, and an estimated 500,000 players, the most loyal of which approach the game as a religion, and the playground as their church. 'You can play high school or college for four years. You can play Pro for a decade. You can play pick-up ? for life.' Doin' It In The Park lovingly uncovers this movement through the voices of playground legends, NBA athletes, and most importantly the common ballplayer who all day looks forward to calling 'next' game at their local schoolyard. Co-directors Bobbito Garcia and Kevin Couliau visited 180 courts throughout NYC?s five boroughs to create their debut documentary. They traveled to a majority of the locations by bicycle, carrying camera equipment and a ball in their backpacks. The film's title refers as much to the subject matter as it does to the method of filmmaking, providing an unprecedented perspective on urban America's most popular, and accessible, free recreation.