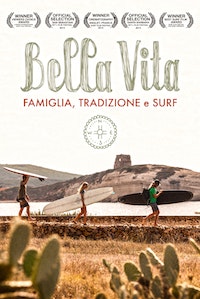 Born of mistral winds and witness to the birth of western civilization, the waves of the Italian coast have carried merchants, fishermen, travelers and kings. Preserved like a roman ruin, the surf of the Italian coast now carries surfer, artist, and environmentalist Chris del Moro on a pilgrimage back to his ancestral homeland to explore a culture where old-world-convention and traditional craftsmanship have matured into a modern surf lifestyle and destination.??A visual epic captured in stunning 35mm, Bella Vita is an intimate and powerful journey of self-discovery, seeped in culture, tradition, and passion- where family comes first.

Shot in Italy, with a focus on Tuscany, Sardinia and the Mediterranean Sea.