Which Way is the Front Line From Here? The Life and Time of Tim Hetherington
Press Area

Which Way is the Front Line From Here? The Life and Time of Tim Hetherington 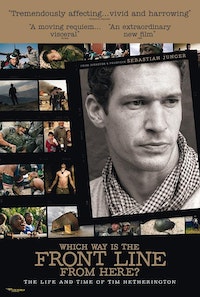 On April 20, 2011, shortly after the release of his documentary RESTREPO, and only six weeks after attending the Oscar ceremony as a nominee, photographer and filmmaker Tim Hetherington was killed by mortar fire in the city of Misrata, Libya, where he'd been covering the civil war. He bled out in the back of a pick-up truck while being raced to the hospital, comforted by a Spanish photojournalist who was holding his hand and trying to keep him awake. Those moments ended a brilliant ten-year career in which Hetherington not only covered such dramatic frontline stories as Liberia and Afghanistan, but also transcended the conventional boundaries of image-making to become one of the most important journalists of his generation. In the powerful new feature-length HBO documentary WHICH WAY IS THE FRONT LINE FROM HERE? THE LIFE AND TIME OF TIM HETHERINGTON, Hetherington's RESTREPO co-director and bestselling author Sebastian Junger ('The Perfect Storm', 'War') traces his close friend's work across the world's battlefields to reveal what made him such a singular talent, and remarkable human being. The film also illuminates the incredible risks of the combat journalist's profession, at a time when they are dying with greater and greater frequency in war zones.