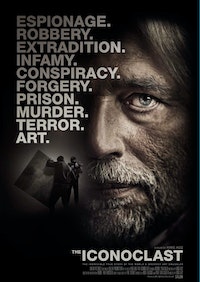 For twenty years, Michel van Rijn led a cat-and-mouse chase, evading Interpol and CIA, while making millions smuggling stolen icons, artworks, and rare antiquities around the world. A secretly captured confession that the cause of death of the Nazi War criminal, was in fact an assassination, not accidental drowning. Revelations linking Islamic State terror cells to the most prestigious levels of the art world in Western society. And a smoke screen of a man, whom is nothing as he seems, at odds with all he says, yet charismatic, and cultured to the highest order. All set against the unbelievable life story of the 20th Century’s last great swashbuckling adventurer: The Iconoclast.