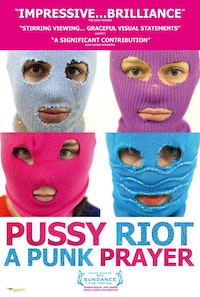 Three young women face seven years in a Russian prison for a satirical performance in a Moscow cathedral. But who is really on trial in a case that has gripped the nation and the world beyond – three young artists or the society they live in? Filmed over the course of six months, this film tells the incredible story of three young women: Nadia, Masha and Katia. As members of the feminist art collective Pussy Riot, they performed a 40 second "punk prayer" inside Russia's main cathedral. This performance led to their arrest on charges of religious hatred and culminated in a trial that has reverberated around the world and transformed the face of Russian society forever. With unparalleled access and exclusive footage, this film looks at the real people behind their now famous colourful balaclavas. Following the bizarre and intricate twists of the trial, we observe three young women fight back against a justice system that seems impervious to logic. From their family and friends we learn what transformed these women from political activists in to modern day icons. As Nadia, Masha, and Katia defend their convictions from a cage inside the courtroom, those Pussy Riot members still at liberty plan new guerilla performances and cultivate a protest movement across the globe. Moving from farce to tragedy and back again, the film explores how political and religious forces contrived to make an example out of three young artists who stepped out of line. But with Nadia, Masha, and Katia, Russia's ruling powers got more than they bargained for. Are you a ready for a Pussy Riot?